I am grossly over-educated, which means I’ve got way too much “stuff” crammed into a limited-capacity storage device, my brain.  So, I was thinking…uh huh…the Sons of the American Revolution should have a password, like the fraternities have.  Or, perhaps, some common experience to recall by use of a title or phrase.  So, if I were to meet Rob in a dark alley in a strange country, one of us would say “Marbury” and the other would say “Madison.” Marbury v. Madison is the typical starting point for first-year law students.  And then we could identify our specialties…I’m partial to “Black Motor.” The Black Motor Car case validated the process by which a reserve for bad debts could be used against taxable income.  Well, see what I mean…too much “stuff” filed in the cranium.

Practically speaking, however, we do have something to say to each other when we meet…we can speak about our ancestors, particularly those that served in the revolution.  These aren’t so much stories, but are pieces of our history, that when put together, describe the founding of the most amazing country ever in history.  What Rob and I learned in Law School didn’t exist before Marbury v. Madison.  At the time of the Revolution, and part of the reason for the Revolution, consisted of compliance with laws that were created in a distant land.  A land that had kings and princes, created knights and ladies as the favorites of their overlords, and nobles sat in a House of Lords set apart from the House of Commons.

As the Colonies were being settled, local councils were formed and leaders chosen.  They were too far from the Motherland to be able to call for guidance from the distant courts.  As the numbers grew, however, economics and territorial integrity in the face of foreign expansion resulted in a shift from local rule, back to the rules legislated from the homeland.  So, here is the challenge to those of us whose families were here from the earliest days:  Can we be open-minded enough to see that there is an essential evolution in self-governance that sometimes requires more than evolution, perhaps even revolution?

I’ll leave to the reader how that applies to today.  But, as this is a column is about our genealogies, I’m reminded that many of our early judicial practices focused on violations of the accepted norms.  In some communities you were fined for growing a beard, and in others for not having a beard.  You were fined if you didn’t show up to church, unless you were assigned the watch.  Of course, if you didn’t attend to the watch you were fined.  And, on and on.

When I first did the genealogy for my children, I became enamored by the number of preachers and ministers there were on both sides of their family trees.  Of course, it pleased me to see the names of the famous preachers of their times, Cotton Mather, Solomon Stoddard, and my favorite (kind of…) Jonathan Edwards, who was called as the early president at what would become Princeton (where I studied while attending the Seminary).

Circling back to forms of government in the earlier days of the Colonies, one finds that the religious leaders were very much a part of the process by which the rules were administered.  When you review your ancestors, examine their roles in the legal processes they participated in.  As we learn about how our ancestors lived, there is often an opportunity to see what leadership roles they played, AND where they ran afoul of the local system of justice.  As I did such a review of my ancestors, I found many admirable traits, and a few surprises that reset my thoughts toward otherwise fabled leaders.  And though I hate to close with a disappointment in my own search, I found several relations to the Salem Witch Trials…a couple were hung, a couple died otherwise, one was acquitted, and one watched with approval…and my respect for the famous preacher of that time, Cotton Mather, was lost.

Our “passwords” as we gather with other members are the memorials of our ancestors.  When the stories are truly complete, they are more than just that we had an ancestor serve in the Revolution.  They are the stories of peoples’ lives, how they lived, and what they believed.  We honor them for their contributions to our great country, but we also recognize them as individuals who were farmers, coopers, tinkers, cobblers, smiths, inn keepers, fisherman, wheelwrights, merchants…and preachers.  Some were poor, and others wealthy.  Some worked and some played.  Some fought and some died.  Each played a part in who we have become, and as we learn from them, who we will be.
Posted by Oregon Sons of the American Revolution at 11:37 AM 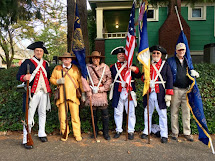